Like many women, Kathleen McMullin reinvented herself because she had no choice. She fled an abusive relationship with three young children in tow. It was 1978 – before food banks and single-parent resource centres existed. She was 33 and, for the sake of her children, decided she had to make a new life. “It’s one of those things you kind of think about for a long time, but you never know how you’re going to do it and then, all of a sudden, it’s like now or never,” she said. “Frightening as it was, it’s that basic thing that you learned in basic biology – fight or flight – and I didn’t have any fight in me left, so I thought, it’s got to be flight. You’re down to that basic level and it’s survival.” Kathleen came to Victoria because she had been to university here in the 1960s, but didn’t really know anyone. She had been a teacher, but when she called to get on the substitutes list, she was going to be number 283. 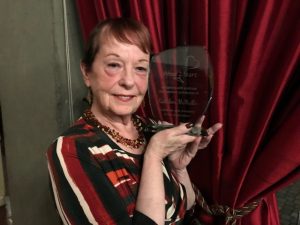 At the annual general meeting in 2017, Wear2Start recognized one of its key founders and first president, Kathleen McMullin.

“We’ll starve to death before the phone rings,” she thought. She managed to find a government assistance program to sponsor her to take legal secretary training at Camosun College. But when she finished 10 months later and was ready for job interviews, she had nothing appropriate to wear and no money to buy anything. “When you’re on welfare and going to school, with three kids, you’re doing this juggling thing (with money) all the time: Pay the milk bill this month, now I won’t pay the phone. I’ll pay the hydro. Next month, I’ll pay the phone and I won’t pay for the milk. It’s just a constant juggling,” she says. “I didn’t even have enough money to buy a pair of nylons, let alone an outfit.” Desperate, she swallowed her pride, and she went to the mom of one of her daughter’s girlfriends because she looked to be about the same size. “I had seen her at some school functions of my daughter, where she came from work and she was dressed nicely, in a business suit. So, I thought, I guess I’ll go and ask her. So I did. It was hard. It was humiliating.” Years later, when she was semi-retired, she heard about a program that helped women who needed clothing for a job interview, just like she had. That organization was a franchise and it would cost $5,000 to start a chapter in Victoria. Instead, Kathleen and a small group of women raised funds and started their own non-profit society, called Wear2Start, officially incorporated Sept. 17, 2001. Kathleen was the society’s first president. Thanks to that small start, many hundreds of women have received a work wardrobe to help them take a first step in transforming their lives.

Looking for a heartwarming way to celebrate the month of love this year? Join Langham Court Theatre @langhamcourttheatre and the Ukrainian community on Friday, February

Providing work attire wardrobes may be what we’re best known for, but that's not all that we do. We also offer clothing, shoes, and accessories

A huge thank you to Moxies on Yates for donating their private room for our Wear2Start board meeting and end-of-2022 celebration! The atmosphere was lovely,