Paris Jewellers: A gem of a supporter 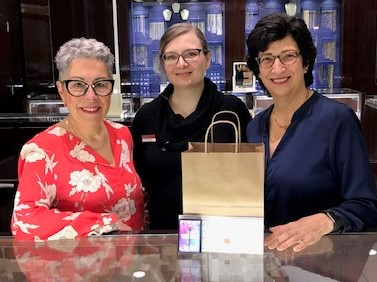 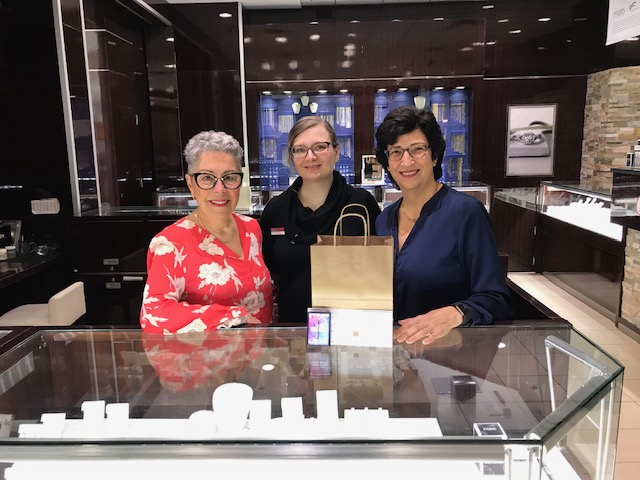 Here’s a sparkling example of the great support we receive from the business community: Paris Jewellers in Hillside Centre has twice chosen Wear2Start as the beneficiary of its Pay-It-Forward campaign. On March 27, we picked up a cheque for $150 for the most recent campaign from Paris Jewellers Hillside manager Davina. The Canadian company’s stores sold specially designed 18-inch, stainless steel pendants that feature a four-inch bar inscribed with the words GRATITUDE, COURAGE, KINDNESS and TODAY IS A GIFT and donated the profits to charities in each store’s local community. 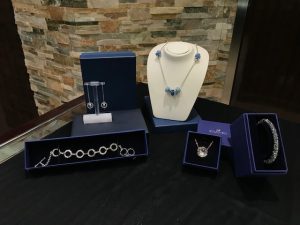 With a $480 gift certificate that Paris Jewellers donated to W2S in May, we were able to purchase a silver necklace with blue Paris Expressions beads as well as four Swarovski crystal pieces — a circle link bracelet, earrings, a rose gold-plated crystal globe necklace and a crystal dust cuff-style bracelet. Watch for some of these items at an upcoming raffle.

Paris Jellewers, which began 31 years ago with one store in St. Albert, Alberta, has grown to 26 stores in four provinces. It was founded by husband-and-wife immigrants from Vietnam, whose entrepreneurial spirit turned an opportunity to apprentice as goldsmiths into their own thriving business. Today, their daughters, Chau and Trang, lead the company which employs 230 people across B.C., Alberta, Saskatchewan and Ontario, 90 per cent of whom are women. What a great match for Wear2Start!

The business’s Pay-It-Forward campaign has helped charities in all four provinces. After the campaign held around Mother’s Day 2018, Wear2Start received a $480 gift certificate, which we spent in store on some gorgeous pieces of jewelry that will be part of an upcoming raffle. Stay tuned for details.

Again, many, many thanks to Paris Jewellers, a true gem of a supporter!

Looking for a heartwarming way to celebrate the month of love this year? Join Langham Court Theatre @langhamcourttheatre and the Ukrainian community on Friday, February

Providing work attire wardrobes may be what we’re best known for, but that's not all that we do. We also offer clothing, shoes, and accessories

A huge thank you to Moxies on Yates for donating their private room for our Wear2Start board meeting and end-of-2022 celebration! The atmosphere was lovely,